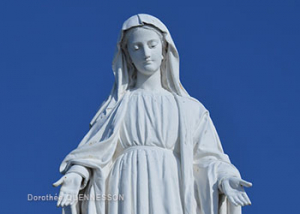 Recently, an article from Aleteia spoke about the beginnings of the Miraculous Medal expressed as follows: “On Saturday November 27, 1830, the Immaculate Virgin appeared to Saint Catherine Labouré, Daughter of Charity. She entrusted her with the mission of striking a medal the model of which she would reveal to her. All those who wear it with confidence and recite this prayer with piety: "O Mary conceived without sin, pray for us who have recourse to you" will enjoy special protection from the Mother of God and will receive great graces. "

In 1832, during the cholera epidemic which spread in Europe “…many miraculous medals were distributed… the graces were immediately received and there were several cases of unexplained cures, but also miraculous protection for people in direct contact with the sick, as well as spectacular conversions. "

As we are also living in a time of epidemic, why not call on Mary Immaculate help our communities? Isn't Mary the patroness of all Oblates? The inspiration came to me; I spoke about it to the person in charge of the liturgy and to the priest, who celebrates mass at the Residence where I live now… This idea delighted them and, on September 20, during mass, nearly 200 medals were blessed and distributed with an explanatory bookmark. It has now become Mary's project…

A few companions have asked me for the bookmark model to follow suit in their respective communities. I responded with joy! We live in a time where many people have let their faith drift off to sleep and for many of us, who are limited in our ability to reach out, spreading this devotion is something we can do.

If Mary so wishes a small medal can do a lot. “More than ever, today, it is good to remember the effectiveness of the miraculous medal, when it is worn or given with deep faith, in a spirit of surrender and trust in love and absolute benevolence from our Heavenly Mother.”

As well, perhaps vocations could arise from such random journeying of Mother Mary. May she inspire each of us.