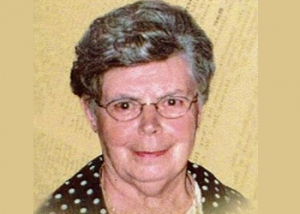 Reine-Aimée was a pioneer of our Institute, present at the time of the foundation.
The unfolding of her life: Reine-Aimée was the 11th child in a large family of 14. Early in life she sensed the call to consecrate her life to Jesus.

Several years later, around the age of 16, she met Father Louis-Marie Parent, OMI, and told him of that desire. He told her to wait a little... he had a project for a foundation in mind.

Then, in 1952 when she was 23 and had taught school for 4 years, she received a letter from Father Parent saying that, in July, he was facilitating a retreat in Edmunston (New Brunswick) for candidates who were interested in his foundation project. Reine-Aimée attended that retreat.

At the end of the first day, Father Parent, (passionate as always) had assigned responsibilities to each: Luce Lacombe, a nurse, was named “foundress,” Isabelle Delisle, co-foundress and Reine-Aimée, the formator of new recruits.

Reine-Aimée hesitated to take on such a responsibility. Father Parent asked her, “Have you ever done this?” “No,”she replied. “Then try and we’ll see,” he said. And that is how she became responsible for formation, first in Grand Falls (New Brunswick), then in 1953, at the house of formation at Cap-de-la-Madeleine.

Reine-Aimé had pronounced her first vows October 7, 1952. Shortly after she was assigned more responsibilities.

In February 21, 1953, she opened a house at Cap-de-la-Madeleine. Prophetically, the house number was “555” and the street name was “Notre Dame.” Soon after, with Marguerite Desharnais, she moved to 20 Sanctuaire Street.

Here are several events that reveal the humility that characterized Reine-Aimée:
One day during one of his visits, his Excellency Bishop Pelletier (of Trois-Rivières, Quebec) commented, “Such a young woman with such big responsibilities!” Reine-Aimée replied, “I am not alone. There is Father Parent and competent companions. I wouldn’t want to bear the same reproached the Lord addressed to Peter, ‘O man of little faith, why did you doubt?’”

On another occasion she had a similar response to Cardinal Léger who had asked, “Who runs the Institute? Is it Father Parent or Madame Reine-Aimée Welsh?” She replied, “It is neither, Your Excellency. It is the Holy Spirit!”

Indeed, it was the Holy Spirit, through the person of Bishop Albert Sanschagrin (a cousin to Reine-Aimée), who inspired Reine-Aimée to suggest to Father Parent to undertake procedures to have the Institute recognized by Rome. And the approval was granted.

Following the 1967 General Assembly
After 22 years of dedication at the head and heart of the Institute, Reine-Aimée, accompanied by Angèle Demontigny, spent a year in Paris studying in human relations.

Upon her return she enters the labor market working in a bookstore, then in Quebec City in charge of the MSA Welcome Centre for the Ministry of Social Affairs which provided shelter and social reintegration services to unwed mothers. She was well prepared for this commitment; it suited her perfectly, as was confirmed by her team and supervisors who were impressed with her respect for others, her calm demeanor and her frankness.

Retirement
Upon retiring in 1988, Reine-Aimée moved to a residence in Quebec City then later to Montreal. She never doubted her calling to Oblate life nor did she doubt the survival of the Institute (that many labeled as a flash in a pan or a passing fancy). Her spirit of service and her faithfulness set the tone for all the Oblates she welcomed during her many years at the head of the Institute.

Sixtieth Anniversary of the Institute
In November 2011, on her 60th anniversary in the Institute, Reine-Aimée drafted a short autobiography. Here are a few extracts describing her journey as she experienced it:
She writes:
From the beginning I always did my best to foster the emergence of the founder’s charism, to leave him all the space. I have never considered myself the foundress; I would say to myself, “It is Father Parent who received the grace of foundation and not me.”
At the end of his life Father Parent told me, “Reine-Aimée, I thank you for what you have been for the Institute. I have always been sure of you and sure that I could count on you.” These words struck a chord with my deepest sentiments. My docility to the charism of the Institute, as revealed through Father Parent, was my way of serving as the Virgin Mary served.
I was docile because I was convinced that that was what the Lord asked of me. There was never a doubt from the moment I said ‘yes’. I would sometimes offer suggestions but it was always he who made the final decision. I made it a point not to be a hindrance. I was not at the service of Father Parent but at the service of the Lord in all that Father Parent, the intermediary, asked of me.
I once told Father Parent, “Working for you is easy but working with you is not always easy.” All that to say there were difficult moments but I remained faithful to my calling in all that required service, gift of self and availability.
I therefore served with profound faith, in freedom, in discernment and in great abandonment. I stayed in the background. At times when I was at a loss, I am sure the Lord gave me the wisdom and the discernment I needed.
One of my great joys was when I saw the Basilica at the Cape filled to capacity for Father Parent’s funeral. I said to the Lord, ‘How I am pleased that you gave me the grace to be faithful to all you asked of me, because there were many occasions when I could have created issues in Father Parent’s mission.

We see in these writings how discretion and humility were intentional choices Reine-Aimée made.

Dear Reine-Aimée,
You, the humble and discrete woman who was a precious collaborator of the founder of our Institute, be assured that your name will forever be etched in the history of the Institute and in the heart of each one of us who has known and loved you. You have truly been the ‘beloved queen’ of all with whom you have crossed paths.

Obtain for us the grace to continue loving the Institute as you have loved and served it these many years among us.

Rejoice now in the presence of the Beloved of your life!